Eight years ago, give or take a few days, was the most amazing, painful, spiritual, mind blowing experience of my life.  It was the day, or night, that my daughter, Karima was born.  She was born at home, in our house in Marrakesh, after 38 or so hours of back labor.  If you know what that means, then you know.  If not, then ignorance is bliss.  I’d like to say I had an amazing, natural, birth, with lots of candles and self-empowerment…But the home birth was actually pretty old school.  My 70 year old Swiss midwife, arrived with, I’m not kidding, a small black leather bag full of medical equipment, a la 1800’s doctor making house visits.  She settled in the next room with her knitting and said to call when I needed her…

But really this is not the story I’m telling now.  That whole story was amazing and deserves its own post, perhaps.

What I’m trying to set the scene for here is…it’s Karima’s birthday!  And how do you celebrate an 8 year old girl’s birthday?  Do birthdays simply get more and more elaborate?  More goodies in the goodie bags, more complicated games, fancier canapes (junky enough for kids, yet still appealing to adults), more expensive presents?  It’s hard not to play the game of up the ante.  It’s all pretty overwhelming, for the parents, and especially for the birthday kid.

That’s why I pre-emptively suggested the following to Karima right after her 7 year old birthday party: “hey, next year, what do you think, instead of a party, you could pick one or two special friends and have a really cool experience?”.  She was into it…and so, this year, I’m happy to say, we had the best ever, beach weekend birthday celebration.

We packed our kids in, along with a couple more that we borrowed from neighbors and friends, and drove two/three hours towards the coast, from Marrakesh to El Jadida.  Some friends of ours have a cottage right on the beach, and while it’s rented during the summer season, it’s empty now.  Score!  How lucky is that?

El Jadida beach, or Sidi Bouzid, was still quiet at this time of year.  Somehow, it’s not a touristy beach, we saw only Moroccans there.

The kids braved the pounding surf, dug holes in the sand to see the water come up.  Then there were the kites.  When you have five kids, who are maybe a little cranky from a long day, trying to fly a kite is an impossibly stressful activity.  So much expectation, such unsatisfactory flying experiences.  Nevermind.  There was still the sunset over the Atlantic, the excited joy the kids had in sharing everything together, the rocks and shells they reported back with periodically, the pleasure of eating together out of one big plate (lunch was a veggie platter, a giant omelette and a fruit platter), the showers and hopeless battle against sand everywhere, the sheer craziness of spending 3 hours in the car together.

As a parent, so much of your own happiness derives from your children’s happiness.  For me, it’s seeing my kids being kind to each other, spending time outdoors, finding creativity, sharing willingly, engaging the world and being engaged by it.

And once again, it’s my midnight blogging hour, rushing to post before postponement happens once again, and although I’m never quite as expressive or careful with my words as I could be during normal hours, I guess it’ll have to do. 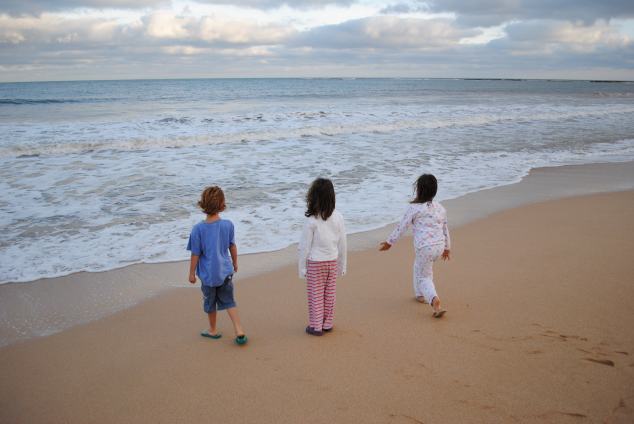 The kite was in the air for a nanosecond, everyone was elated: